Welcome to the blog of the Pi Wars Robotics team Bad Pidea, our members are:

Robot control and a menu

I have been taking part in Pi Wars since it started. The first year I got in with a reserve ticket, finished in the lower 3rdof the competition and was determined to come back next year and do better.

One of the many issues I had that year was not having a menu system to run the challenges code, a way of shutting down/rebooting my robot and finding out information like the robot IP address or battery voltage.

The next two Pi Wars, I used a touch screen hat with a menu to select the challenges code and manual mode plus display useful information. This worked well and used modified code from Spencer Organ’s internet radio project link here (https://learn.adafruit.com/raspberry-pi-radio-player-with-touchscreen#). For Pi Wars 4 I used a SSD1306 OLED 128 x 32  to display the menu and information, the joypad ‘D’ pad to change the options in the menu and last years Pi Wars I run out of time and did not end up implementing a menu system and repeated most of the issues I had the first year.

This year I’m not going to repeat that mistake!

This years robot Sherpie is a rover with four silly sized large wheels at each corner and goggly eyes. Sherpie has a Raspberry 3 model A for its brains, a Red Robotics Redboard+ motor driver hat for contolling the motors, servo and other stuff plus a daughterboard for comm’s, a SSD1306 OLED display for displaying useful information and the menu system .

Before I go any further I must mention that Neil gave me a Redboard+ hat to test and he only asked for me to give my feed back.

The Redboard+ is a hat sized motor driver that packs a lot of features into the hat format. They include

Heading to the Redboard page on GitHub, the readme is a great introduction to the Redboard+ with clear instructions how to install the required libraries and example code plus setup services for monitoring the battery and the user defined button. Neil has also supplied a pre-built image for you to flash to a SD card. Tried both methods and was able to get a robot up and running in a few minutes. Using a Pi Hut controller Sherpe respond well to input. The OLED screen displays your robot IP address if connected to wifi network and the voltage of the battery. The user define switch as been setup to display the IP address of your robot, when held in for a few seconds will reboot your robot  and if held for longer will turn off your robot.

the Red Robotics Redboard+ is a good value robot controller with great features and an easy to use Python library with a well written guide how to setup your Raspberry Pi with example code to get you started. I was so impressed with the Redboard+ that I treated Bill my eldest son aka @jedifodder on Twitter to an early Christmas present.

Despite the example code written by Neil for the Redboard+ I want to use a PS4 controller which Neil’s code currently does not support. I decided to roll my own, I based my code on the example code for my Tiny 4WD robot kit downloaded from Tom Oinn’s inputs Python3 library examples. The code is based on code written by myself modified by Emma Norling and Tom.

To use the code I had to modify two functions and add an import statement for the Redboard+.

The functions were set_speeds and stop_motors and the lines where the code updated the motors power was replaced with code for the Redboard+. Next I wrote some code for the menu and finally added code to display the menu on the OLED display.

After testing the code, I realised that the code would not run if the OLED display was not present, I added code to check that a display was attached and the display function prints to the console if a display is not discovered.

The main loop tests for changes in the status of the connected joypad sticks , button presses and updates as required. If the menu button is pressed the current mode is suspended and the menu is displayed. Pressing the up/down buttons on the controller will change the menu item and pressing O will select the menu item. This clears all menu flags to False apart from the select menu item. The code in the conspiring code block will be switched on.  When writing code for the code blocks, it is important to avoid blocking the main loop with sleep statements, instead of using sleep statements, it is best to save the current time, then check the elapsed time and if enough time as passed carry out task as required. An example can be seen in the home screen refresh routine.

To add menu items you just need to update the menu dictionary and create a new menu test to switch the code on. The rest of the required setup is handled by menu setup code before the main loop is started.

Add your code instead of the pass statement. If you wish to control your robot while running your own code you need to set the manual control menu item to True.

The code I have written is not the only way of controlling your robot there are other methods and techniques that can be used but hopefully my code is easy to understand and modify for your own robot. I have made the full code available to download from the Open Pi Robotics project GitHub repository.

LiDAR on the cheap using the HLS-LFCD2. Pt2

A quick recap, I brought a cheap LiDAR from Ebay for around £30, see Pt1 for more details.

I started by removing the tiny plugs and fitting DuPont 2.54 headers(female) to the cables.

The next job was to make a converter board, so I would be able connect the LiDAR to a serial port, power it and connect the motor to the control circuit as according to the data sheet.

I connected an USB serial cable and started PuTTY, no magic smoke was released so far good. next I tapped ‘b’ and the top of the RiDAR start spinning and began spitting out data on the screen. hitting ‘e’ stopped the top spinning. I copy the output and pasted into a HEX editor to look at the data and could only see garbage!

I next tried a some incomplete Python code written by partner in crime Rob, I butchered it, printed the data to PuTTY screen and saved the output, this look promising but still did not look right and looked to have errors and/or missing data.

Finally I done what I should have done at the start, I wrote a simple Python program that read the serial data and writes the data to a file.

The code basically, opens the serial port, send the start command to start the sensor spinning and outputting data, then reads the data from the serial port and writes the data to a file. after 10 seconds it stops collecting data and sends the stop command.

Once again loaded the file into a HEX editor and the data looks to be correct with no errors! on this high note, I will end this post. In part 3, I will try to extract meaningful data form the data set! wish me luck!

LiDAR on the cheap using the HLS-LFCD2. Pt1

First of all let’s define what LiDAR is

“LiDAR is a surveying method that measures distance to a target by illuminating the target with laser light and measuring the reflected light with a sensor.”

The VL53L1X infrared ToF sensor is a simple form of a LiDAR sensor. and commonly used by Pi Wars robots for detection of walls and objects. One of the disadvantages of using them is that they only have a single point of measurement, to overcome this you need to use more than one sensor to get a better overall picture of the environment around your robot.

To get over the issue of having to use more than one sensor to get a better overview of the physical environment around a robot, sensors like WW2 radar were developed using lasers instead of radio waves. But there has to be a ‘but’ the available sensors are expensive, costing over several hundreds of pounds. There has been a movement towards lower cost sensors costing around £100. probably because the rise of robotic hoovers.

My team mate Rob sent me a link to a LiDAR sensor on Ebay. The HLS-LFCD2 for about £30. At that price I could get one to play with! As the seller was in the UK, it turned up in a couple of days. Comparing the item I received from ebay, with other examples on the internet and the single data sheet I found. It looked like there was a mount attached to the sensor. I removed the mount, then drilled out the mounting holes to 3mm using a jewellers drill and fitted 2.5mm PCB spacers.

Next steps are replacing the plugs with 2.54 headers, mounting on a plate with a stipbroad interface for power and conectting a usb serial lead for reading data from the sensor. I also need to test that I can actually get some sensor data then convert it to usable data.

Bad Pi-dea was originally a hovercraft. Brian had competed at Pi Wars with a 4 wheeled bot, a 2 wheeled bot so why not do a no wheeled bot

Had a good collection of parts 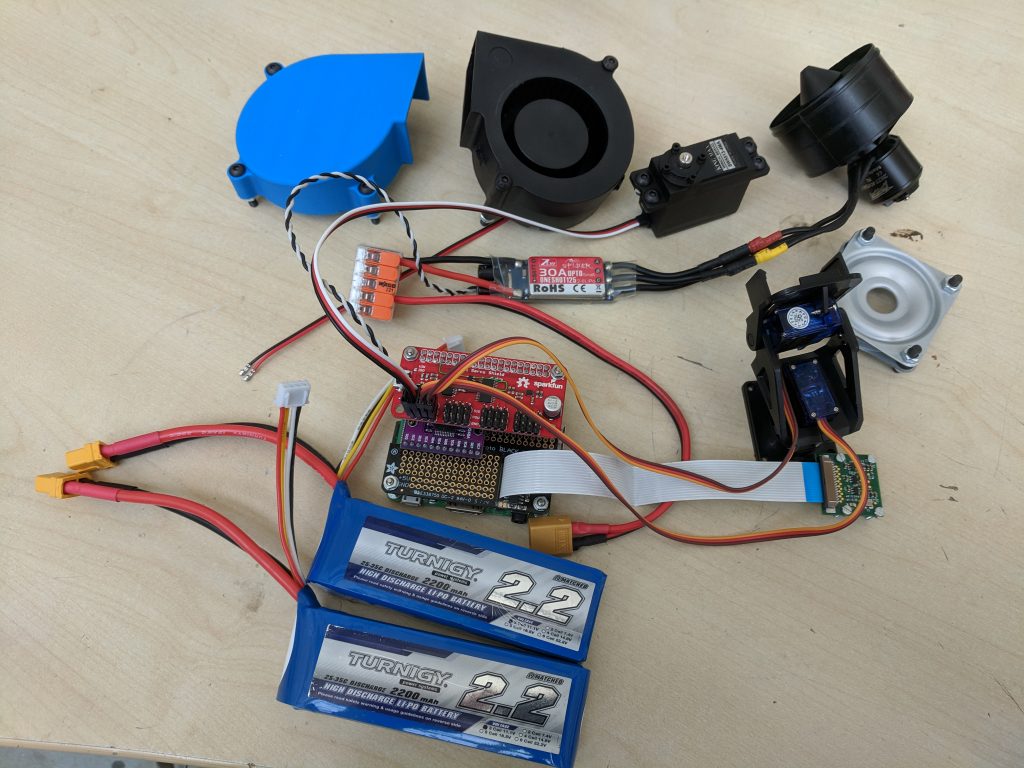 Development was started before the call to arms and more importantly the details of the challenges for Pi Wars 2020 event were released. When the challenges were published, we both independently came to the conclusion that it would not be possible to enter with a hovercraft 🙁 due that a hovercraft would be impossible to control. Rob suggested that we base our robot on the Russian off road vehicle Sherp. 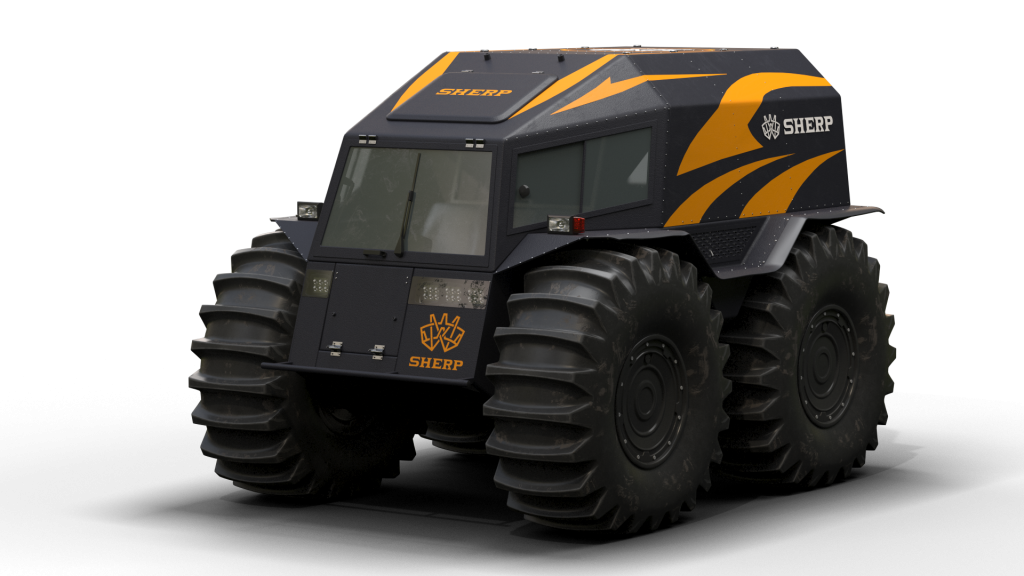 The Sherp is not road legal, can cross rivers and ice fields. cross mud pits that stop after 4 x 4s. For your enjoyment here’s a video.